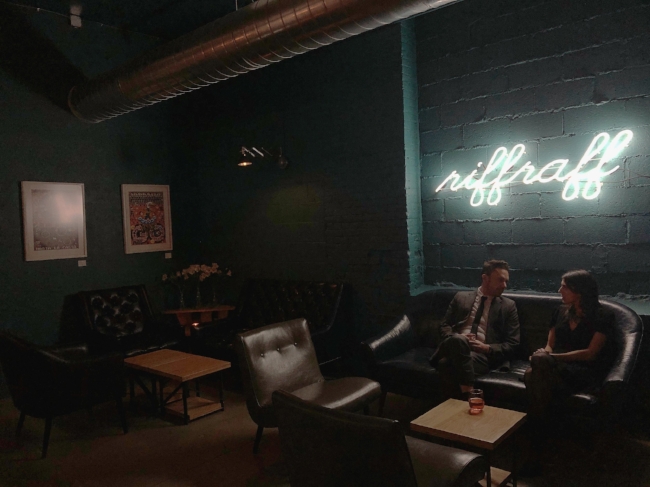 Tom grew up in Connecticut and served in the Peace Corps before landing in New York, where he worked in a variety of roles in the book world: bookseller at McNally Jackson; managing editor at A Public Space; editor at Penguin Books; publicist and bookstore liaison at New Directions; and deputy director at Albertine Books. Some of his favorite authors are Don DeLillo, Chris Kraus, and Lawrence Block. His favorite drink is a scotch on the rocks.

Emma studied literature at college in Providence before completing a master's degree in translation in Paris. She was a Fulbright Scholar in Morocco, where she worked translating a number of Moroccan writers from French into English. Her translations also include the genderless novel Sphinx by Anne Garréta. Some of her favorite authors are Marguerite Duras, Anne Carson, and Marie NDiaye. She's recently become a big Mezcal fan.

Riffraff draws its inspiration from the best independent bookstores and neighborhood bars, establishments that are welcoming and comfortable and integral to the community. It's the kind of place where readers looking for a selection of thoughtfully curated books might sit down at the bar and ask their neighbor what they’re reading, and where those meeting a friend for a good inexpensive drink might also pick up a book at the same time.

Riffraff was only possible through an incredible amount of financial and moral support from friends, family, and community investors. Thanks to all of you — you know who you are.

All design and fabrication, in the bookstore and bar, was done by Joshua Kampa.

Your cart is empty.